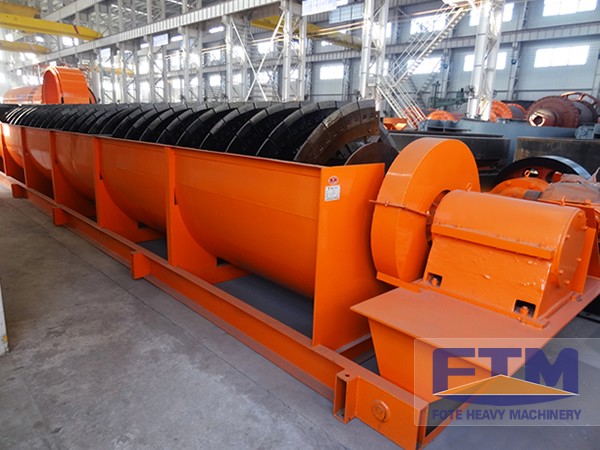 1.The structure of the equipment.

The area of spiral classifier is the decisive factors that affect the production amount and classification size during the processing operation. Increasing the width of the groove, or reduce the inclination of the overflow weir height can make the grading area increase. The classification of groove width depends on the spiral transport back sand diameter, and the ratio of large spiral diameter is 100~200mm. The bottom of the groove angle is mainly determined by the need to upgrade the sand return height, and it does not have too slippery for limits of underground ore. Structural parameters can change in production process, which is mainly the overflow weir height, but the factors in the initial production are confirmed, and they usually have very little change. The height of overflow weir is referred from the spiral shaft centerline to the overflow weir top slant, for high weir type of classifier, it is 400~800 mm or 930~2000 mm for immersion.

3.The Properties of ores.

The effect of ore properties mainly consists of three aspects: mud content in ore, density and particle size. Ore density is almost proportional effect on weight of the classifier production capacity; the ore particle size composition and the effect of the mud content are mainly reflected in the slurry viscosity. If the settling velocity is small, the precision of the processing ability and classification will be decreased.

Prev: The Controllable Factors for the Ore Dressing Effect of Classifier

Next: The Comprehensive Maintenance Tips of High Efficiency Concentrator